A veteran songwriter, solo performer, band leader, producer, and session guitarist, Jim Vick has received numerous arts and performance awards for his work in the U.S. and has shared the stage with many much bigger names in the music world. And though you may have already heard his music featured on the soundtrack of Taste the Islands, the Lifetime Network and American Public Television syndicated cooking show, or any of a number of independent and promotional films and other media works, you probably don't know him by name. Unless, of course, you've caught a live performance or stumbled across one of his independently released albums sometime in the past 35 years or so.

Beginning his career performing his original songs in Rochester, NY, Jim relocated to Madison, WI in the 80's and then to Seattle in the 90's. But for most of the last 17 years, Jim has continued performing regularly on the south Caribbean coast of Costa Rica in the little surf and yoga retreat destination and ecotourism town of Puerto Viejo, Limon that has become his home, supplemented by occasional summer shows in the U.S. His multi-instrument one-man-jam-band shows, solo and duo acoustic sets have been featured at some of the area's best performance venues during the winter-spring high tourism season.

Since early in the Covid-19 pandemic, Jim has returned to highlighting his acoustic roots in creating his Live at Home videos of his new and previously unreleased songs and releasing them on his YouTube channel, Jim Vick Music.  Resuming live performing in February, 2023, the songwriter is also still at work on production of his long in progress Bhakti Blue: The Rumi Songs, an album of original songs based on the Sufi poet's work that will feature collaborators  Jim's most recent album release, Punta Rasta, combines the reggae and calypso sounds of the Caribbean with bluesy guitar, Latin jazz, Afropop, and American folk roots in a musical "rondon" stew that one fan calls "Latin Americana."  It's available on disc and for streaming and downloading here and at most major online distributors, including iTunes, Bandcamp, and Amazon, and for streaming on Apple Music, Spotify, and Amazon Prime. Sign up for Jim's email updates above and you'll get links to free music downloads, private advance links to new live performance videos, and exclusive previews of his works in progress

"Jim Vick's creative fusion of jazz-rock, folk, ethnic, and pop elements makes for some of the most refreshingly vital music to appear in sometime . . . a songwriter unafraid to take risks with both words and music." - Tom Bingham, OP Magazine

"an eclectic blend of folky jazz with a solid dose of world rhythms" - Kenny Hart, The Singing Songwriter and Indie-Music.com 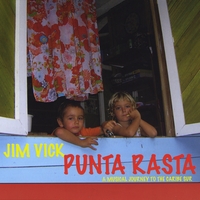 LIVE Without a Net 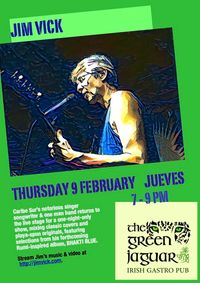